Ooooh! A Baby Bobcat! (Or How I Found a TON of Stuff, Writing and Otherwise) 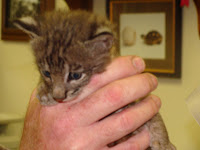 Isn't that the cutest bobcat kitten? I took this picture at a state park, a year or so ago. Now the little kitten's all grown up and back in the wild.

So, last week, I decided to get my carpets cleaned. Not the way I usually clean them, with my steam cleaner mostly smashing dirt and such back into the carpet. Oh, no. I contacted Super Cleaner Guys who will move ALL your furniture and leave your home spic 'n span.

That was Mistake Number 1. Because one has to get super-prepared for Super Cleaner Guys. I moved TONS of stuff out of rooms, into bathrooms and shoot, I said to myself, might as well take this stuff down to the basement rather than lug it back into the room where it's just hanging out, collecting dust.

That was Mistake Number 2. Because everytime I moved something, I found more dust. Goodness, I said to myself, that's a lot of dust. Actually what I said was more like, "RUN FOR YOUR LIFE! IT'S THE ATTACK OF THE GIANT DUST BUNNIES!

I survived. But I still had to move all the stuff back. Well, I said (and really, it was more like a growl) I should go through all this stuff before I put it back in the bedrooms and the offices.

I found quite a bit of stuff, writing and otherwise:

*My Michael Buble CD (Oh, Michael, I missed you and your honeyed voice!)

*The remote so I could turn on the CD player and listen to Michael Buble (Whew! I'm not gonna lie-I had a hard time figuring out how to operate remote-less.)

*A note with the words: Psalm 51 ( I think because "Create in me a pure heart, O God, and renew in me a steadfast spirit." is within that psalm. It's a very moving psalm. I'm glad I re-read it.)

*Notes from a talk that editor Cheryl Klein gave, almost three years ago. (She discussed the theme of the Harry Potter books and stressed how important it is that your plot support your theme. What lesson does your character learn through the plot?) But I wouldn't have checked out her swell website today and found that she has a forthcoming book! On plotting, revising and publishing for children and young adults. Wheeee!

*Issues of Writer's Digest from 2008 and other outdated kid's magazines (which I recycled to friends). Amongst the WD articles I skimmed before recycling(because there's always a few you don't get to), I read one about giving critiques and the do's and don'ts of critique etiquette. Which brings us to kittens.

Say there's a member of your critique group who shares a piece of writing wherein you are so offended or so confused or so non-plussed, that there's simply nothing on the positive side to say.
Give 'em a kitten.
Posted by Cathy C. Hall at 11:36 AM