Sally Hall is giving me a look as I sit here typing away. If I'm correct, the look is "Are you gonna eat that?" Or maybe it's "Somebody needs a bath." It's hard to say since I'm not the Dog Whisperer. 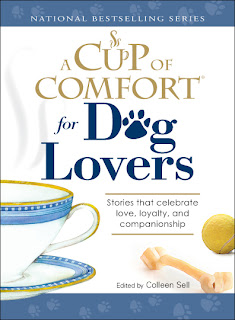 Last October, around this time of the month, I waited anxiously to hear if my Sally story had been accepted. I'd sent it, way back in August, to the Cup of Comfort for Dog Lovers. By October 5th (Remember how I said the first of the month is a reckoning time for me?) I reckoned my story was a bust. Especially since another member of my writing group had had her story accepted the month before.

But you never know in the submissions business. Smack dab in the middle of December, I got an e-mail saying my story was being considered. After a quick edit, I sent "The Cost of a Dog" back to Colleen Sell and waited again. On New Year's Eve night, I opened my inbox to find an e-mail saying Sally would be in the book! It was perfect timing, since I was celebrating anyway.

Funny thing about that night. I ended up going down the Road to Publication twice. But that's another story...and besides, Sally was right. Somebody definitely needs a bath.
Posted by Cathy C. Hall at 4:10 PM