Letters From Home By Kristina McMorris 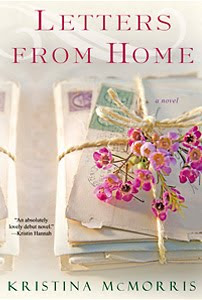 We have an expression around the South that dates back to when writing letters was commonplace. Let's say you tried a recipe that didn't go over too well. You might say, "It was nothing to write home about." Even back when we wrote letters, we acknowledged that taking the time to "write home" about something was special.

And today, I've got something special to share with my home readers. It's a lovely book called Letters from Home by Kristina McMorris who's on a WOW! Blog tour this month.

Kristina McMorris lives in the Pacific Northwest with her husband and two sons. She has garnered more than twenty national literary awards since writing her first novel, Letters from Home. A graduate of Pepperdine University, she spent twelve years hosting weekly television shows, including an Emmy® Award-winning television show at age nine. Prior to her literary career, she was the owner of a wedding/event planning business and public relations director of an international conglomerate.

Here's a brief synopsis of this charming story:

In the midst of World War II, a Midwestern infantryman falls deeply in love through a yearlong letter exchange, unaware that the girl he's writing to isn't the one replying. Woven around this tenuous thread are three female friends whose journeys toward independence take unexpected turns as a result of romance, tragedy, and deception, their repercussions heightened by an era of the unknown. "Ambitious and compelling...[a] sweeping debut" (Publishers Weekly), LETTERS FROM HOME is a story of hope and connection, of sacrifices made in love and war – and the chance encounters that change us forever.

I love the concept of this book, of the letters from home. And I worry that we'll lose the art of letter-writing what with technology zipping along faster than the U.S. Mail. I asked Kristina to share a few thoughts with us about letters, and the writing thereof. Here's what she had to say:

For example, here's a possible note of endearment via email:

And, on Facebook you could even luck out by getting "poked." (Although I'm still not entirely clear what that means.)

The benefit of speediness in today's correspondence is inarguable. But have we lost something meaningful in the process? No matter how heartwarming the message might be, how many times do you reread an email? Or a text? A tweet?

Until a few years ago, I had no idea my grandparents had met only twice during WWII before getting married. Upon revealing this astounding tidbit, my grandmother retrieved from her closet a secret collection of the wartime letters responsible for initially forging their bond.

In contrast to the modern-day exchanges above, here is an actual excerpt from one of my grandpa's letters:

"Every night I dream of you and those nights and days we have spent together. There shall never be another for me but you, Darling. Every part of me is true blue to the one I love…..Gee, Darling, how happy I would be to let you sleep on my arm tonight and every night from now on. I love you! Just 62 more days! Bushels and bushels of kisses, Hon.

Indeed, that is the type of letter worthy of repeated readings. In fact, this was the very stack of letters that inspired me to write my first novel, LETTERS FROM HOME, thereby changing the course of my life.

So yes, life is busy, and time always seems in short supply. But every once in a while, take a few minutes to express how you much you care—through a device that doesn't have an on-button, that is. You never know how deeply your message might reach, or who else you could inspire even decades down the road."

That is so true, Kristina! In fact, I'm inspired right now. I'm giving away a copy of Letters From Home to one lucky commenter. I'd love to know about the last time you sat down to "write a letter home."

I think for me, it was the summer I spent in Europe. But I have a feeling I left out all the good stuff in that letter!

P.S. You know every letter has to have a P.S. Here's yours: For more about Kristina and her book, Letters from Home, check out her website at kristinamcmorris.com.

P.P.S. Oooh! Remember the P.P.S.? I forgot to tell you that the giveaway runs through Monday. I want to give all my readers plenty of time to write home to Cathy C's Hall of Fame for a chance to win!
Posted by Cathy C. Hall at 8:57 AM