Tooting My Horn Tuesday on the Old Goal-O-Meter 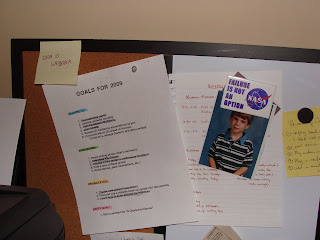 When I checked my old Goal-O-Meter last night, I realized that a. I've got just a few working months left for 2009 (Because let's be honest. We all know I'm not going to work in December.) And b. I've accomplished most of my goals!

Which is kinda amazing, considering my um, work ethic. Take, for example, today. I started out reading my email and saw a message about writer-ly quotes. Well, I had to check out Karen's post over at her blog, Musings of a Novelista, because you never know when you're going to need a nice, inspiring quote, right?

Thinking about writing quotes made me think of The Writer Mama Giveaway, so I had to scurry over there and check out what Christina Katz was giving away. And then I had to comment, 'cause you can't win if you don't comment. And just now, I had to check the url and ended up reading all the comments (already up to 20!)

Then, I had to find my camera, 'cause everybody likes a neat picture on a blog post...but would you believe I spent five whole minutes, trying to plug the wrong end of the cable into the computer? Eventually, it dawned on me to turn the dang cable around and try the other end, but time was a'wasting.

I suppose to the untrained eye, time-wasting would appear to be the essence of my work ethic. But think of all the interesting people and stuff I would have missed if I'd taken that direct path to my goals.

Which I've almost met-in September-thank you very much!
Posted by Cathy C. Hall at 12:11 PM