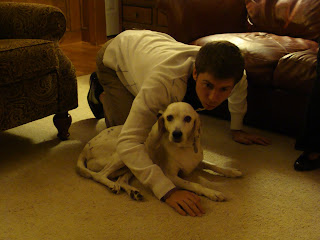 It's been a bit quiet around the Hall house the last few days...we had to say goodbye to Sally the Crazy Dog.

And as I stood at the sink, washing her bowl and dripping my sloppy tears into the soapy water, I thought, Good, old Sally. She was such a good dog.

So I started giggling, then laughing right out loud. Because Sally Hall was not such a good dog at all. There was a reason why we called her The Crazy Dog.

*My favorite (and only) really expensive sweater

*Three window glass panes (trying to get to lizards)

*The window sill (because sometimes, knocking out a pane isn't enough)

*Most of the carpet

See, Sally would dash from any wood or tile-covered floor in the house to a carpeted floor of the house when she needed to throw up. That's because Sally would also dash from anywhere in the house if anyone was eating anything. And because she could beat a toddler in persistent whining, she always got something to eat, whether she should have been eating it or not.

No, Sally the Crazy Dog was not such a good dog...but she was the best ever dog for the Halls. We'll miss her like crazy.