Finding Something Friday on a Contest and Yetis 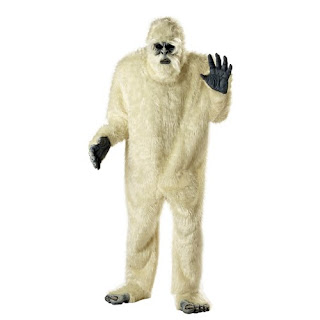 Sometimes, I like to throw a word like "Yeti" into a blog title just for the fun of it. But today, I actually have a reason for including "Yeti."
I had a dream about a Yeti a few nights ago. And the night after that, I dreamed about a Zombie Teenager, chasing me all over town. Honestly, I didn't know zombies could run like that. Anyway, I seriously wished I'd written down those dreams. I mean, the plot lines wouldn't win any prizes, but the feelings engendered during the dream stories were so intense! Haven't you ever wished you could capture intensity like that on the written page?

So, now I'm going back to keeping a journal by my bed. I want to write down how I feel when I wake up from those Yeti/Zombie Teenager dreams. And maybe I can use those journal jottings to inspire some emotional zing into my stories.
Which brings me to the contest I found this fine Friday: The Writer's Journal Write to Win Contest using the starter phrase "Standing under the..."
Now, generally speaking, I'm not overly keen on starter phrases (which the Write to Win contests use). But, this phrase is so...well, easy to work around that I could probably take a few of my stories and just slap it on the beginning. Not that I would, mind you.
Um, maybe I would. The deadline's February 20th, after all. But I'm leaning more towards "Standing under the streetlight, the Yeti flashed a toothy grin at the Zombie Teenager."
(P.S. Isn't that a swell Yeti costume? Kinda reminds me of the Beneficent Mr. Hall before he shaves in the morning.)
Posted by Cathy C. Hall at 9:27 AM