What Not to Do Wednesdays (The First One)

I've learned a lot about writing since I started on my Road to Publication. Mostly, I've learned my lessons the hard way. That is, by making mistakes. Apparently, I'm one of those people who must do something totally stupid so that the lesson will stick in my head. Thus, I may not exactly know what to do, but I'm becoming a real pro at what not to do. 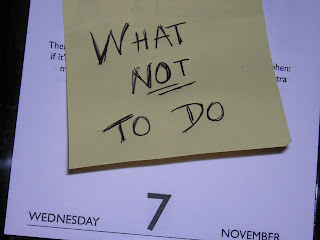 The first hard lesson learned involved Contests, Part One. (Yeah, you can expect a Part Deux next week. Maybe even a Part Three. I had a lot to learn about contest-writing.)


Way back in the early days, I found a writing contest that called for entrants to finish a story. It had to be in the style of the original writer (Simple!), continue the plot and solve the mystery (Is that all?) and mention a name-brand product in a prominent way (alright, already).

Easy-weezy, I said to myself. Except that I spent weeks working on this grand opus. Which didn't win (Some Bozo won. Seriously. It was a clown from Omaha or somewhere). Now, friends, what was I to do with this wonderfully clever, albeit narrowly-conceived story I had filling up my Documents file?

Pretty much nothing. All that work for naught. Unless, little grasshopper, you consider the lesson I learned about what not to do.

That's not to say I don't do contests. Or that I won't write a story that must stick to a theme, or complete a first line, or write in the style of another author. In fact, I placed in the Top Ten Finalists recently in the Will Rogers Writing Contest (http://www.columnists.com/).

But if I choose a contest along those lines, I won't do one that requires me to use a ton of my precious writing hours with very little chance of any payoff. And I absolutely won't write something for a contest that's good only for that specific contest.


Or maybe I just learned that I wasn't the scathingly brilliant writer I think I am?